Where it all began

The McFall family began using trucks on the farm and from there expanded their fleet with the civil construction business and now the fuel industry. The evolution of the use of the family name on vehicle began in 1958 as the family immersed themselves in the life of a number of rural communities from Ohaupo, to Paterangi, to Arohena. The trucks use were Thames Traders, Commers, Bedford, and an international ute all in predominantly green and white livery. The trucks were used for farm activities like haymaking. When the family focus moved to civil construction based in Te Awamutu the trucks purchased were designed to meet the needs and demands of the growing business in Waipa Distict. The Mercedes and Leyland Hippo formed part of the heavy vehicle fleet needed for road construction. The family surname inside a rectangle became the logo and brand with the move to a strong gold with some white and a touch of blue on the vehicles. McFall Enterpises continued to grow and the range of trucks on the road included the following brands: Foden, Ford, Nissan, Mitsubishi, Isuzu and Hino. At the same time the logo and brand changed with the McFall name now moving into a clearly defined black rectangle with a gold background. The trucks became white with some gold retained as par of the image. During this time McFall Enterprises involvement commenced with the fuel industry. 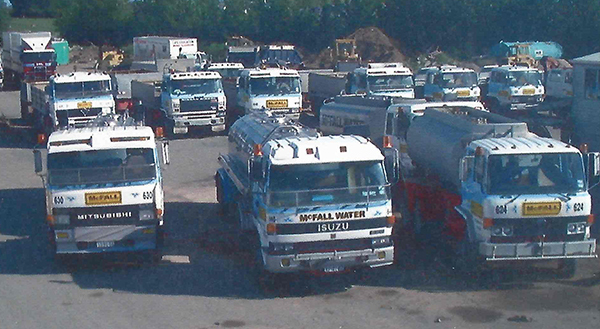 Becoming serious about fuel saw the distribution supplier relationship develop with BP. The Hino and Nissan carried the BP brand livery that hand been used for 70 or so years. Initially it was McFall Fuel with the name only prior to the gold rectangle brand image. In 2000 the BP logo changed to the helios which is the name of the Greek sun god. The McFall Fuel fuel delivery vehicles saw vehicles branded to meet the needs of the change as the Foden truck and trailer illustrate. While initially McFall Fuel appeared on the front of the truck and the helios on the door with the rectangle McFall logo in gold appearing just below the window, soon a new look McFall logo appeared on the cab of the Foden. The new look logo with the watermark of a fuel drop and nozzle with McFall on top, with the word 'fuel' underneath was placed on the Volvo's, which would become the predominate heavy vehicle brand for McFall Fuel appeared in the early 2000's. In 2013 McFall Fuel decided to create a new look for fleet in the market place which consisted of Volvo's, a Foden, and a Nissan. The decision was to hold onto the McFall logo but strengthen the word 'fuel' in the logo. The imagery added to this drew on the family's colour of gold and a swoosh effect was used to illustrate the dynamic nature of the business and of course fuel. Both the heavy and light vehicle fleets were rebranded. In 2015 McFall Fuel merged with Direct Fuels who ran a fleet of Isuzu's and Mitsubishi's. 2017 saw the merge with Rural Fuel who ran Volvo's plus another business call FEX that used Isuzu's. All three brands are now being transformed to the McFall Fuel brand. The International used for Bush BBQ's, Customer and Community events draws together both the past and where we are today. The farm utility was an International and it was appropriate to brand it drawing on the current and past brand imagery.

We now have a fleet of trucks and light vehicles of which we are extremely proud.

The heavy vehicle fleet is being built to meet the demands of different sectors that the business services. 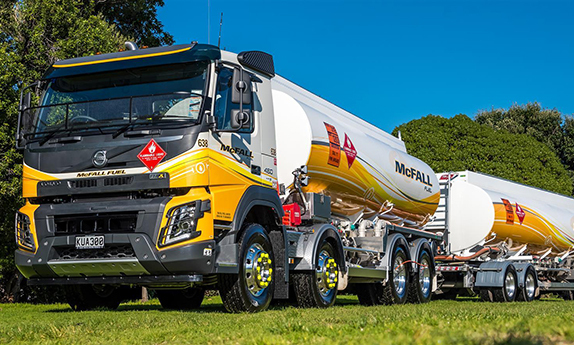 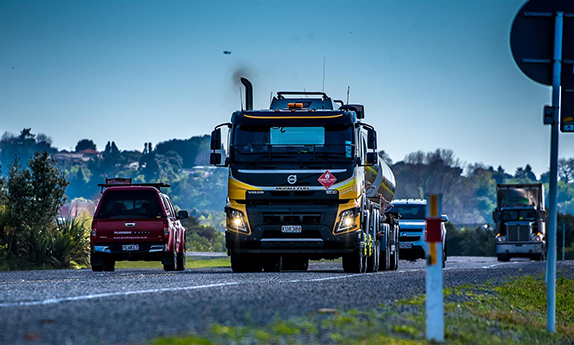 MOVING ON TO THE NEXT GENERATION 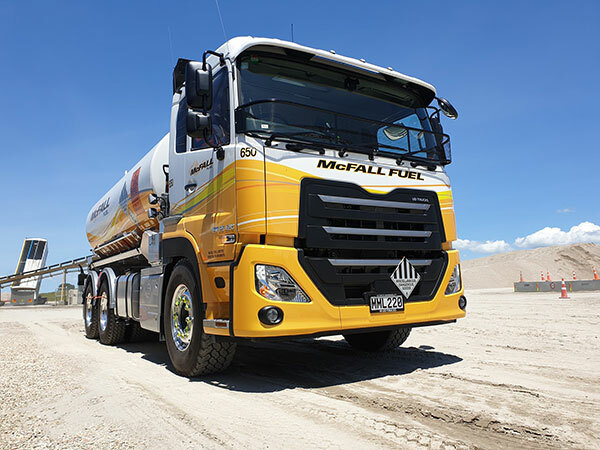 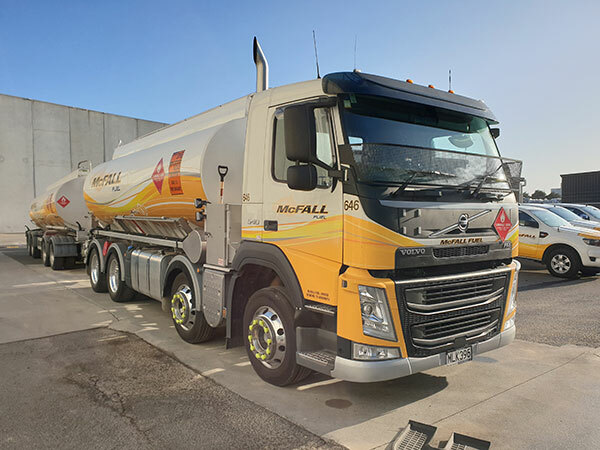