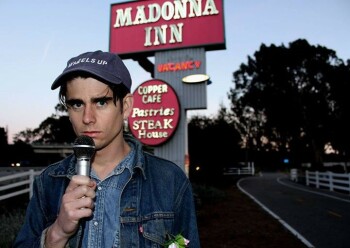 McFall Fuel Operations Manager, Paul Clampitt’s son Leroy has been busy in Los Angeles trying to gain a foothold in the music scene. Leroy has now got the support he needs to support his dream by having his 3 year American Visa approved along with receiving a grant from NZ On Air for a video and a song to get him underway.  McFall Fuel provided a sponsorship to help get him get started in the USA 12 months ago and like all good muso’s Leroy now has a stage name—Taste Nasa. He covered a lot of ground over the year — touring the States in the Strange Babes a supporting act for the Naked & Famous, involving himself in a radio programme promoting Kiwis in LA as well as signing a record deal for his second EP and locking in a publishing deal as a writer and producer. Leroy’s Time Goes By ep is a great listen.

Recently he had time at home which saw him judging the Smokefree Rockquest as well as producing material with NZ artists. Plus the talented young musician from Pirongia was producing covers for Dancing with the Stars. The real crowd pleaser performed by Tueila Blakely and Scott Cole to the hip hop song Ice Baby plus Ben Barrington and Krystal Stewart used Leroy’s cover A Thousand Years and Enrique Johns and JJ from the Edge used Shake It Like a Pom Pom. What talent!