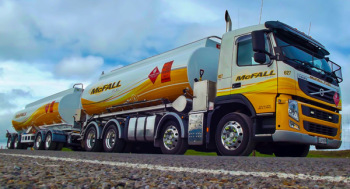 McFall Fuel and Rural Fuel merged on 1 April 2017. The new entity will see McFall Fuel (51%) and BP (49%) become joint business shareholders in the new partnership. Initially the McFall Fuel and Rural Fuel brands will operate as two brands under the new entity that will operate across the North Island. Both companies have very similar values and customer sectors with the real point of difference being the four truck stops and four service stations that Rural Fuel have in the lower North Island. The merge is a significant step for both bulk fuel distributors who also supply and deliver lubricants, and pride themselves on their customer service.

The merge offers the ability to drive efficiencies and be even more competitive in a rapidly changing marketplace by utilising the existing capability and capacity of both the companies. The merged business will operate across the North Island from Wellington to Warkworth. It is believed that the combination of business strength and expertise will position the new entity well for future success.