Recent Posts
Archives
Cunningham Over The Moon After Strong Whangarei 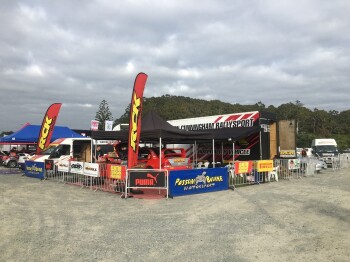 After being dogged by brake problems at the opening round, Rally Otago, Cunningham headed to the event on his former home roads desperate for a clean run.

He and Greg Ruka made a steady start to the day, happy that the hard work put in by the team at Possum Bourne Motorsport meant that they were not on the massive list of drivers suffering problems in the early stages. Cunningham’s biggest issue in the morning was to come around a corner and find a fellow competitor crashed on a single lane bridge. By day’s end, the pair had moved inside the top ten.

“We just had the most fantastic weekend. The car looked good, went good and the result was good. Really, we can’t ask for much more than that,” said Cunningham.  “We had a great group of people supporting us on our sponsors tour too, so it was great that things went well for them as well.”