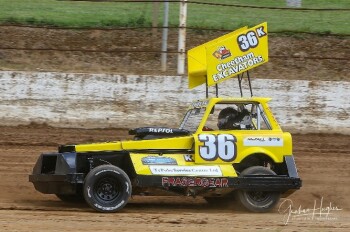 There were over 105 cars there.

Clinton started on grid 10, which was not the place to start as it is on the outside mid pack, and so his aim was to push inwards to the pole line very fast, as corner approached. He managed to do this and was racing hard. The track condition was terrible. After about four laps Clinton went into the corner and then all of a sudden headed to the infield and stayed there.

The engine decided it was too rough and let go. There was no compression in one cylinder and so that was our weekend of racing over.

The next racing will be 5th January, Clinton will race Kacey’s car at Baypark.