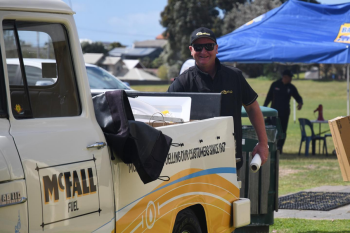 McFall Fuel, as part of their involvement with Bay of Plenty Rugby, supported the Under 13 Development Day at Blake Park. Warren Broadmore, Business Development Manager for Farming is seen here getting lunch ready for the youngsters who had been putting in some pretty hard work on a very windy day. The programme saw some of the injured Steamers introduced along with Bay Development Players. These players then got involved and did warm up drills plus group sessions on skills. The individual skills for playing positions were good. Discussions were held to get the youngsters to outline where they could improve. Games and game scenarios were held in the afternoon. “At the Under 13 level the two teams who played against each other saw both boys and girls mixed together. It was a great day and a lot of fun was had by all those who participated. The learning that went on was great. Nathan Harris was awesome at the coaching of the players,” said Warren.