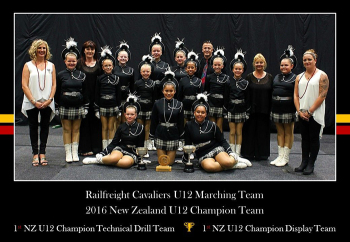 McFall Fuel is proud of its staff sponsorship support because it has seen often their children benefit with the national events that they compete in or a part of. “We supported Stella & Tallula-Belle Smedley for the first time last year and were extremely proud of their achievement at the New Zealand Marching Nationals held in Christchurch. This year’s event on the North Shore saw Stella led the Display team which yet again took out the National Champion Under 12 Marching team, the New Zealand Champion Technical Drill Team along with the New Zealand Champion Display team. We are delighted for Stella and Tallula-Belle as this is the culmination of ten month’s hard work,” said CEO Sheryl Dawson.

Alan Smedley, father of the girls, has been working for McFall Fuel as a driver for 9 years. He is one of Company’s 33 fuel delivery drivers and is based out of Te Awamutu.